ALEX GETS HIS TRIKE.....WHAT A HUGE HUGE BLESSING!!

What an amazing and very emotional day last Thursday when Alex's new RIDE came in and we picked it up!  Tears flowed from my eyes as I watched Alex in all  his EXCITEMENT as he tried out his new vehicle.  He couldn't say thank you enough .... I think this is the most excited and VERBAL about being thankful ever... a different emotion developing if you will.  He is still VERY IMPULSIVE and cannot rationally process information.... still on the READY FIRE AIM streak instead of processing information as we do Ready AIM Fire.  When they presented Alex with the bike his face lit up like the Christmas Tree in Rockefeller Center in NY!  As I quote Alex.... "WOO HOOOOO.... this is the start of a NEW ALEX!..... I'm going to be so skinny and I'm going to enter into bike races!  I want to ride in the ultra 55!!"  Ok so maybe not the Ultra 55 lol.... but I am so excited about his motivation and get up and go ATTITUDE!!!  The start of a NEW ALEX!!  He has ridden on his bike everyday except for one since he got it. 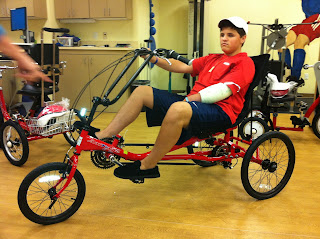 The walking is going great..... still no use out of that left arm and he is still going thru the serial casting in hopes to get that left arm to naturally hang at his side instead of retracting.  THIS HAS BEEN A CHALLENGE as you can only imagine.  Showers are hard enough without adding an extra obstacle in the way!  He has been a real trooper with minimal complaints and it's really only when the cast is digging into his arm at the end where it's a little jagged.  He gets the current one removed tomorrow and they will probably put another one on, lol.  Not sure how long this process takes and you can imagine I am OVER IT ALREADY hahahaha.... HOWEVER.... I will try anything and everything to further his progress.
Our family is in the midst of a storm and I ask that you lift us all up in prayer.  As if what we have all been thru isn't enough..... IT'S ALWAYS SOMETHING.  However.... you know that I have great faith in God and know that he is in control and we will WEATHER THIS STORM!!
PSALM 37:7 Be still in the presence of the Lord, and wait patiently for him to act. Don't worry about evil people who prosper or fret about their wicked schemes.
This Borrowed from one of my angels today ..... People will hate you, rate you, shake you, and break you. But how strong you stand is what makes you.
Baby Caleb Johnson still remains in ICU , please continue to lift him and his family up in your prayers.  Rushing to get Alex ready for his therapy today... gotta run... HAVE A GREAT DAY!
PEACE~LOVE~N~THUMBS UP! LISA
Posted by Alex Ross Updates at 9/27/2011 11:27:00 AM


Alex is doing great... we have been going thru a series of casting that left arm.... THAT HAS BEEN A NIGHTMARE but I will try anything to get that arm to hang straight atleast until we can get that Baclofen pump trial going.  His walking continues to improve... smoother and faster... I have videos to share and will try to get them posted tomorrow having issues right now. Always something!!

PRAYERS NEEDED
I have a very special prayer request tonight my friends.... please pray for Caleb Johnson, 18 months old who is in Wolfson's Hospital and has been since Thursday suffering from a traumatic brain injury and swelling to his brain.  Today we are asking that you pray for his breathing.... I was asked to concentrate prayer on that for today.  Lisa and Craig are his parents, mother and father to 5 children.... PLEASE LIFT THEM ALL UP IN PRAYER.  Lisa has not left his side.... you all know I can soooo relate and feel their pain and emotional roller coaster that they are on while watching those monitors like a hawk.

I visited the hospital today and prayed over baby Caleb asking God to heal him from his head to his toes... praying that God performs another miracle on this beautiful baby as I know he is quite capable of doing this very thing.  I ask that all my prayer warriors pass this family on to others to pray for them and baby Caleb so that another of God's miracles can be witnessed by all.  I have encouraged her to blog as an outlet and she was trying to get set up on caring bridge so I will keep you all posted if she gets a site going.

Thank you my sweet friends and angels.... WE ALL KNOW THERE IS POWER IN PRAYER!!!  AMEN!

Hellooooooo my friends!!  A lot has been going on since my last blog!  Alex was awarded a NEW BIKE by the Bike Ability Foundation from Lisa Federico!  If you or anyone you know are looking for a great cause to donate money to.... please contact her at elisabeth.federico@bmcjax.com  Her organization helps children like Alex and grants them a bike!  There are families that donate money to her foundation and every couple of months she is able to award a child with disabilities a bike so that they can experience something that we all take for granted..... BEING ABLE TO RIDE A BIKE.   We are so excited because now we can all bike ride and Alex can get some outside excursions and exercise while enjoying himself! :0)  We went for measurements last week, the bike should be in within the next 6 weeks and YOU KNOW WE WILL BE PIMPING THIS THING OUT, LOL! 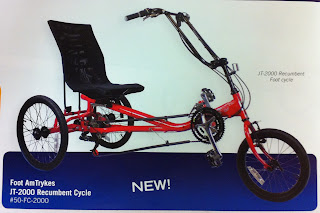 Last Tuesday he got a cast on his left arm!  No he didn't break anything, lol...His occupational therapists think that it will help in getting that left arm to hang straight instead of retracting like it does.  He still has no REAL functionality out of his left arm and hand but he continues with therapy in hopes that one day that arm and hand will wake up and remember how to function!   The cast has been a nightmare... imagine that!  His sleep has been very limited because all of the tone and spasticity that was in his arm is now all gone to his fingers at the end of his cast and his fingers tend to curl uncontrollably and very tightly around the bottom of the cast causing MUCH DISCOMFORT and irritability to say the least!  IT'S ALWAYS SOMETHING!!  However.... the cast will be coming off tomorrow and hopefully they will come up with a new way to cast or keep the elbow straight because I'm over this method of therapy after just one week, lol.  No fun for either of us at this point!  It goes all the way up UNDER his arm by his arm pit and hangs all the way to his fingers... HEAVY, bulky and just plain uncomfortable.  It has hindered his independence here at home with getting up and going to the bathroom by himself, etc.... so I'm worried that even though it may help in the recovery with his arm... it may regress him with all the other obstacles he has overcome and learned to do by himself! 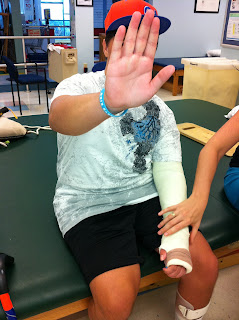 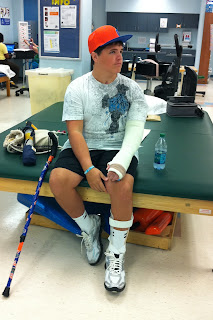 As you can see below he has really gotten the hang of walking with his cane and with God's continued daily miracles.....before we all know it he will be running around again!!  I think he may have been showing off just a little because I was filming, ha ha!

The video below Alex is working that left leg and building strength.  The days after he does this he is soooo sore... which means he is really getting a great workout!!

Below he is working on learning to step sideways and cross over.... something we all take for granted that Alex still hasn't even come close to mastering.  His hips are still very tight from being in hospital and wheelchair for so long but with time and hopefully a baclofen pump it will all work itself out!

Here Christy is working with his walking and hip movement and flow.  Doing much better... he certainly has come a long way but still has a very long way to goooooo!

My sweet Alex came up with the idea that he wanted to do chores around the house to earn some money.  ABSOLUTELY, lol!  I thought I would share this with you.... great to see him gaining a LITTLE independence around here and motivation to moving along with getting back to some sense of normalcy in his life.  He vaccuums the living room and dining area, puts away silverware from dishwasher and cleans his toilet and mine!!  CLAP CLAP... HA!!

He has definitely improved so much within the last  month and a half and I'm so proud of how he continues to impress me with his positive attitude and go get em spunk!  We have a cat scan on October 7th to see what is going on with his spine and figure out if he will be a candidate for the baclofen pump trial.

We have been busy bees with therapy and Brooks football.  I have to stop and brag on Brooks a little bit as he has certainly been proving himself on that field and I couldn't be prouder!  I was able to get on the field last week against Wolfson and capture some great shots, so I'll share them below :0)  Alex LOVES going to the games and as you can see from the photo's below.... has certainly got that spirit!!!  ENJOY..... and I'll keep you posted on the cast and the pump! 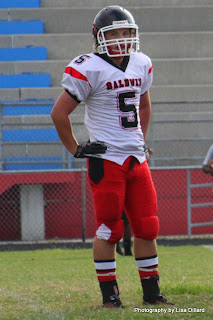 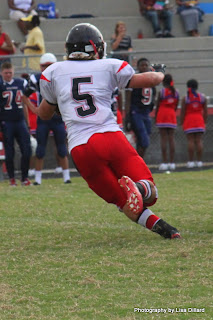 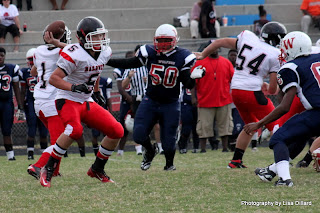 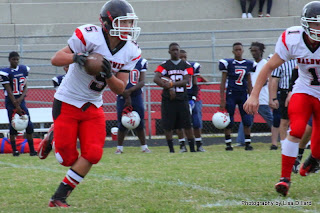 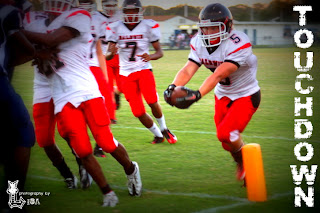 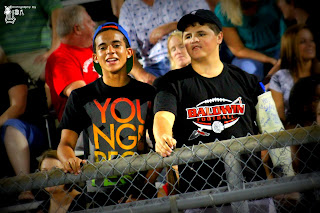 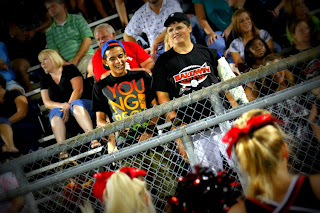 AND MY ALL TIME FAVORITE!!  I think he just might be the cheerleaders favorite CHEER leader! :0) 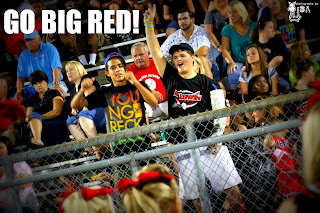