WE WENT TO VISIT A SPECIAL FRIEND!

Friday was a teacher's planning day so Brooks' was home and decided to go to therapy with us after much convincing by his brother, lol.  As we pulled up to the parking lot and proceeded to get out, Alex announces that he has to pee.  Well, the therapist and I have come up with an idea that we want him to walk into therapy with his cane, granted I probably should have pulled up to the door....I'll know better next time, lol.  As he is getting out of the car.... he is insisting for us to put him in his chair so that we can hurry him to the bathroom..... we keep saying no that he needs to hold it and walk in.  Brooks clearly joking and not thinking says..... "just go here".  SO HE DID!  He doesn't turn around to face the car to conceal his weapon..... he just pulls his pants down...standing at the door of the car, FACING ALL THE OTHER CARS AND PARKING LOT mind you, and proceeds to urinate in the parking lot!  I am freaking out..... my eyes racing to all the cars in the lot to see if anyone is actually IN THEIR CAR in fear that they are witnessing Alex, my 4 year old at this point, just a cracking up with Brooks, with a huge arc of pee urinating in the wide open space of a parking lot!  WHAT THE FRENCH TOAST???? OMG!  there was absolutely no way I could stop him in fear he would pee all over himself and then therapy would not go over so well.... as I scan to the front of my car I notice a LADY SITTING IN THE DRIVER SEAT of the van directly in front of me!!!  She was witnessing the act....the good thing is that his door was blocking his weapon... however, I can almost guarantee she could see the stream coming from the door and could guess what was going on as I am flailing my arms about, freaking out and yelling at Alex to stop.... Brooks is cracking up, he can't believe he actually did it....... LORD HELP US ALL!  Alex, Alex, Alex..... what were you thinking?  My little well Big 4 year old looks to me and says... "Mom, Brooks told me to go right here!".  Can we say... traumatic brain injury much?  Thank God he will start back at Brooks Day Treatment on Feb 7th for Tuesdays and Thursdays to get those executive and social skill learning because momma can't handle anymore episodes like that!
So once he finished his business....we managed to get him to walk into therapy and he had a great session at both occupational and physical therapy.  I'm going to teach you the abbreviations so from this point on you will know what I am talking about when I refer to them as OT (occupational therapy) and PT (physical therapy).  In occupational therapy, she wanted him to do some electrical stimulation, of which he HATES.  Brooks being the awesome brother he is suggested that they do it simultaneously so that he could see how it felt and see what all the fuss was about from Alex.  Brooks got to level 14 where as Alex was freaking out and telling her to stop at 4.5 hahahahaha.  His left arm is still very sensitive to touch and feel so he was ready to STOP!  See a little clip below:

At physical therapy he was learning to balance and shift his weight to his left leg.  As he is doing this, you will see him singing me a lullaby.... as he sings, you can hear him sing about peeing in the parking lot...NICE....not!

From therapy we took a road trip to one of the local hospitals to visit a dear friend of ours... Rich Collier, the jaguar player that was shot 14 times, lost his left leg and is paralyzed from the waist down.... back in September of 2008.  He has kept up with Alex since it first happened and we have formed a special friendship with he and his wife.  He is having some of the bullets removed as his body is rejecting them and he is in a lot of pain. We had an awesome visit and stayed for about an hour and as always Alex has him replay that night he got shot.  He sits there and listens like a kid at the foot of Santa Clause, lol.... asking question after question.... even though he has already heard the story probably 10 times ha!  He is fascinated by Rich surviving..... not even thinking about himself and his survival.  I think he is more impressed with Rich's story than his own, lol!  Both are truly God's miracles and his wife and I know how blessed and highly favored we are that they are both still with us.  Alex gave up his bullet necklace to Rich as a keepsake and reminder of how precious life is and what God has done for both.  Please keep Rich in your prayers as he goes into surgery this week..... he is in a lot of pain of which I can only imagine.
Alex's personal photographer (PP as he calls her), and one of my dearest friends.... Rhonda Smith, ventured out on Saturday with the boys and took them to the CIRCUS... just where Alex belongs, ha ha!  I should have asked her to take a resume for him and put him to work, lol!  He LOVED it! Of course he had to get the hat and pose with his "brownie face" that he calls it. :0)  NUT!!  THANK YOU MISS RHONDA... I LOVE YOU!  xoxo 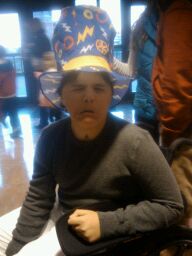 He begins his new semester this week.... Algebra II, Ecology, American Govt, Economics and English IV.  PRAY FOR US, lol.  He doesn't like ANY of these courses so this is going to be a challenge for sure!  As for his teacher.... they say we get to keep her for now.  The email I received 4 days later mind you......was condescending and I did NOT like the tone with which it was written.  Empathy, compassion and understanding it was surely lacking!  So please continue to pray because even though we keep her for now.... the letter left it to mean that at any time they feel the need... they will pull her and I will cooperate.  Nice huh?  Not so much!!!  However... as always... I will continue to focus on the positives and focus on Alex .... one day at a time.... it's what get's me thru to the next day!

We had a great meeting yesterday in regards to the "Celebration of Life" event for Alex.... his homecoming party if you will... FINALLY!  We had about 25 in attendance....THANK YOU ALL SO MUCH FOR COMING and taking time out of your weekend to help out with this!  We are still in need of volunteers if you could give us 2 hours that day to work a table that would be AWESOME!  The event will be held from 11-3 on Sat Feb 12th in the church parking lot across from Macedonia Baptist Church.  We had lots of great ideas yesterday and as soon as we get our answers .... we will have a press release with all the festivities of the day.  If you want to pre-order a shirt so that you ensure that you get one... or are needing a special size ie. youth or XXL, please send me an email to alexrosstrust@gmail.com so that you will be able to pick it up on the day of the event.  I have to pay for all shirts upfront so I am only going to order a limited amount in fear that I won't sell them all and be out of pocket the money.  All orders are due by this Friday, January 28th.

Wishing you all a great work week!!

Philippians 3:13 - No, dear friends I am still not all I should be, but I am focusing all my energies on this one thing:  Forgetting the past and looking forward to what lies ahead......