Today Alex walked with the quad cane.... amazed at how well he was doing and how hard he was working this morning!  Very very proud of you Mr. Alex! 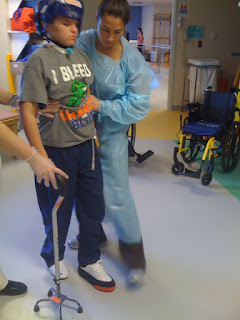 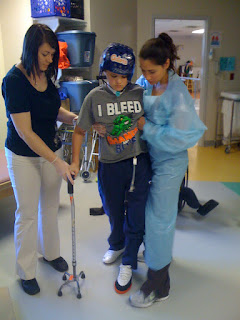 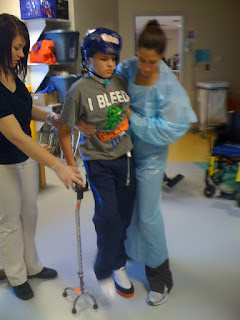 Patients who have had a stroke, brain injury or spinal cord injury sometimes have problems with neurological abilities, such as grasping and other routine tasks using their hands. The Bioness H200 helps patients improve hand function and voluntary movement, allowing them to return to daily activities with confidence.
The Electrical Stimulation Hand Unit uses functional electrical stimulation to improve upper-extremity rehabilitation.
How does it work?
The Bioness H200 has five surface electrodes integrated into the system to stimulate and activate the hand and facilitate neuromuscular re-education. Therapy programs and function modes are pre-programmed, providing the clinician and the patient control over hand activation. Once the device is fitted on a patient, movement can begin immediately.
Goals of the Bioness H200
_________________________________
I truly believe that now he has begun the bioness therapy that it is just a matter of time before he begins using that left arm and hand!!  Here are pics from his first session today.... it really works!! 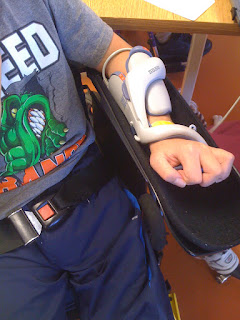 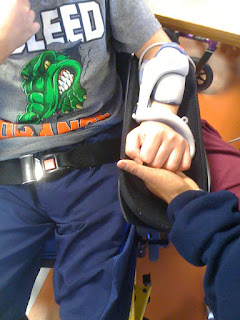 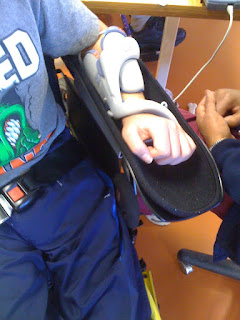 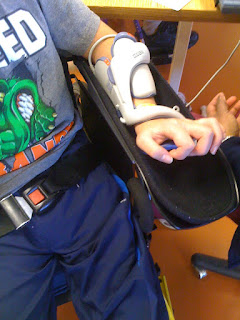 When looking at the different pictures you can see the machine making his nerves open and close his hand by sending out the electrical stimulation signals.  He said it was a little painful but I think it's just the whole sensation thing and he doesn't know how to understand or explain what he is feeling so he calls it pain. Tomorrow will be the true test when he has actually 30 minutes of this therapy as compared to the 5-10 minutes of it he had today.
Today we googled:
tapeworm
Pam Anderson's boobs
jagerbombs on You Tube

Today has been an eventful day as we have a new resident here who likes to scream from her room and Mr Alex loooooves to call the nurses station and tell them ...."tell her to shut the hell up out there"! He actually got a behind the scenes field trip to where Miss Josie sits behind the desk and gets his calls.  He wanted to see and hear how it works when he presses the nurses button lol!  Miss Josie told him she is going to start writing down how many times he presses the button because he doesn't think he presses it alot, but trust me... HE DOES!  If I say no to something he wants... he presses the dang button!  Alot of the times, I have to unplug the dang bed so he can't bother them anymore!  I just went and asked her and she said he pushed the button 7 times and that was probably within an hour and half!   Alex thinks he is a saint around here and was even telling the man next door to us who he has nick named "Rocky" because he is always tied to his wheelchair with these boxing glove things on so he can't hurt himself or anyone else. ..... he was telling "Rocky" not to curse that its not nice.... ha... I said "Alex... that's like the pot calling the kettle black"... he said.." What's that?"  I said.. " you can't tell somebody to stop doing something that you are doing yourself"... he said..." just shut the hell up, nobody asked you".... hahahahaha... WHAT THE FRENCH TOAST?!  He talks about how crazy all these people act around here but doesn't realize that he acts crazy himself! lol!  Brain injury is a crazy thing!!  Again... I wish I could get up inside that head of his head and see what was really going on in there!  I can't tell ya'll half of what he says in here because some of you would be really offended but I KNOW this is just the injury speaking and thankfully will not last ... and hopefully NOT MUCH LONGER LOL!!

Ok so on the balloon thing... I just found out today that this hospital is LATEX free!  No latex balloons... only Mylar... thinking that will cost a fortune huh? WOW!  Back to the drawing board... not sure how to decorate now, lol... will figure it out...thanks to all who wrote and gave me suggestions!!

Alex Michael Ross is asleep and it is 9:30 pm..... YAAAAAAAAAAAAAAAAAAAAY!  I think we found the magic meds solution!  FINALLY!!  Tomorrow should be a greeeeeeeeeeeeat day for therapy!  Say a prayer for him that he SLEEPS THRU THE NIGHT.... No crazy dreams and we will all be happy tomorrow, lol!  Thanks to all who continue to write and encourage.... Randi and I ALWAYS need it...even on a good day!!

SIGNING OFF.... EARLY TO BED FOR ONCE!