GREAT WEEKEND! But is Alexander back??????

Good morning sunshine's it has been going great..... until yesterday lol!  We had an awesome weekend and headed to the beach both Sunday and Monday with the beautiful weather.   Alex did awesome and lasted about 3 hours each day which is incredible considering his patience and attention level.  He walked in the sand, he walked in the water and even took a dip in the FREEZING cold water as you can see below on the video.  CRAZY KID! 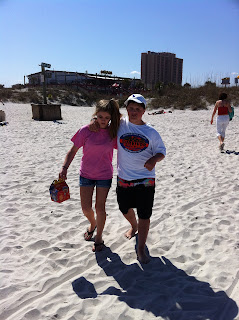 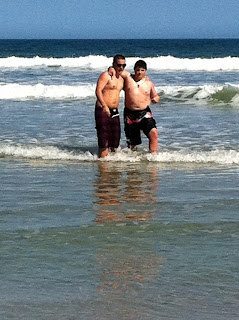 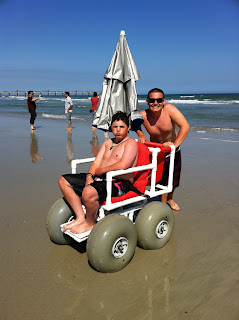 So all has been going great until yesterday morning when he woke me up early with his nightmare.  From there the day just spiraled downward and he was off kilter all day.  WE headed out to therapy for 9 am of which he had a counseling session with the psychologist.  He was not having it... he was not impressed...said he did not need to be there, kept checking his watch of when he got to leave.... he definitely was not the same kid that was in her office the week before.  Alex still has many questions from that day of which he will never get any answers and is having trouble letting go and moving forward....especially when he has nightmares regarding anything to do with that day.  He still suffers from post traumatic stress disorder and when he has a dream like that.... i feel like we take another step backwards.  Like I said he doesn't get mad or sad or depressed... he gets anxious and acts out.  Like yesterday several times he just up and left the group without telling anyone where he was going and they had no idea where he was.  At one point they said he went in a room, locked the door and turned off the light so that they wouldn't know he was in there.  WHAT THE FRENCH TOAST?  Who is THAT kid?  I knew he was off kilter on the way to therapy and even showing signs in the psychologists office but when I left he was certainly out of control and very anxious.  Brooks and I went to pick him up and I had just gone to the grocery store so Brooks went in to get him.  They didn't even know he had left and were calling me frantic because they couldn't find him.  They then began to explain the day he had and I was horrified at all the things they said he had been doing yesterday. Again... certainly not the Alex that has been here.... more like the old Alexander of which has not surfaced in some time!  I reassured them that I would take care of business and handle Mr. Alexander and he would NOT be acting like that on Thursday.  Sooo Mr. Alexander lost his phone yesterday as a consequence for his actions which as you all know is his LIFE LINE right now and hopefully he will not be showing his butt on Thursday when he gets to therapy. This has been a challenge in itself because every 5 minutes he will say.,... "Is my phone plugged in?"  "don"t let my phone die", "Can I get it back tomorrow?", "Did you plug my phone in?".... aaaaaaaaaaaaaaaaaaaaaaaaaaaahhhhh!!!  "Your phone is fine Alex, it's plugged in and if you are good you can have it back tomorrow".  "Well did you plug it in so it doesn't die?".  hahahahaha... I however survived that conversation a hundred times last night!

The tux fitting last week went great... he is going to be all decked out in his tux and yes HAT, lol!  I didn't get any pics of the fitting because his friends weren't able to come and I had to hold him up while he got measured and all.  He kept repeating the designer of the tux, the color of his accessories and what shoes he was going to wear.... his Jordan's of course ha ha!  He is super excited and can't wait.... I just gotta get the limo squared away and we will be in business!

He has a countdown clock on his phone.... and everrrrrrrrrrrrrrrrrrrrrry day he tells me how many days till prom, how many days till Hawaii and how many days till graduation.  i told him another day like yesterday and he won't be doing any of that lol!  I can't imagine what goes on in his head on a daily basis of trying to cope with everything that has transpired in his life over the past year and he has certainly been a trooper but I am going to keep pushing!  I am going to keep pushing him to be all that he can be.... pushing the positives in his life..... pushing to put the past behind and focus on the future because no matter how much we want to go back in time, we can't.  We can't change any of it.  We will never have the answers we want... and even if we did it wouldn't change anything.  We would still be where we are today so hopefully with counseling and this new day therapy..... he will be able to overcome it all and begin the inner healing that he so very much needs.  Please continue to pray for Alex.....he IS doing great on the outside and improves every week with his physical movements...but he has A LOT of inner healing to accomplish with his patience, impulsivity, emotions, filter..... there is work to be done on the inside so that he can lead a somewhat normal life.  I am told it can take 3-5 years and for me.... WOW!  I'm gonna keep on leaning on my God because he is the only one that can get me thru another 3-5 years of this for sure!  Deuteronomy 31:6 " Be strong and courageous.  Do not be afraid or terrified because of them, for the LORD your God goes with you; he will never leave you nor forsake you."  THANK YOU GOD.... for being my rock and for my many blessings each day.  I know that I can always count on you to come thru for me in my darkest of days.  This is your plan and I have accepted the challenge.  Guide me and continue to let your light shine through me so that I can do great things for YOU and in your honor.  Thank you for another day with my handsome boy.  I give you all the Glory, Honor and Praise... Amen!