ALEX SWIMS FOR THE FIRST TIME!

It's been a week of improvements since my last blog. We had a conference with all of his therapist that he see's on Tuesdays and Thursdays that he is at the day treatment program. Alex is improving in many areas.... learning to control his impulses..... learning patience..... appropriate behavior.... time management.... he is getting better with attention and focus span and I believe his cognitive therapist said he was focused for about 20 minutes yesterday which is awesome!! We did school from 11-4 on Monday and he thought he was going to die, lol. He kept trying to get me to stop and I kept on pushing until he had accomplished what I was satisfied with, ha ha. I was told that Alex can not get/understand dry humor.... it's either black or white and whatever you say is what he takes at face value. The psychologist explained it as.... imagine Alex is blind and whatever you tell him is what he believes. Like when I explained last week that Chad came in from running with his running clothes on, sweaty and Alex asked him where he had been. You and I make that connection with the running clothes and sweat.... Alex does not. Chad told him he was doing his taxes outside and Alex took it at what Chad said. Then he couldn't for the life of him understand why Chad was doing his taxes outside, lol. There is a misfire there with reading non verbal ques of which they are also working on at day treatment. He has gotten better with me leaving room and going to take a shower where as before you know I had to be in his sight at all times. He's good for about 10 minutes in living room by himself while I hop in the shower and then he is calling my name, lol. Baby steps.... but I do see improvement and can tell the therapy is definitely helping him. We are to focus on the positive things that he does and REALLY REALLY build him up on those and really praise him when he does something good because that will focus his attention to those things and he will want to do that again. WE ALL LIKE POSITIVE REINFORCEMENT ANYWAYS RIGHT!


He went with Brooks to Brian's over the weekend and he wanted to go swimming so Brian gladly took him! See below:


He also went grocery shopping and pushed the buggy, lol 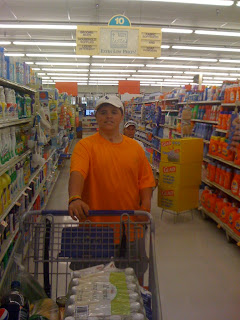 He has really been working hard at therapy..... working with Ms Kate, Ms Erica and Ms Lisa getting ready for Prom! All you parents out there needing tuxes for those boys.... go see Tim Shurling at Karls at the town center .... they have great deals!!! The video is taking forever so maybe I can upload it later. At times it's hard to watch him trying to dance because before this whole ordeal he was an awesome dancer always knew the new dances and latest moves....he and Nick were a team to be reckoned with! So it's hard for me to sit and watch him struggle at what I know he was so good at.... but yes...I am thankful he is alive to even be getting the chance to learn it all over again. FOCUS ON THE POSITIVES!


Alex has since moved on to a one point cane..... IMPROVING with walking. He HATES the one point cane but I just think it's because he isn't familiar with it and doesn't trust that he can walk with this on his own just yet.... even though I KNOW HE CAN, lol! See below"

Below is video of him working with Ms Leanne his occupational therapist. Standing on his own, getting electrical stimulation on that left arm while putting a puzzle together! MULTI TASKING! Working on thought process skills as well! There was a time a couple of months ago when there was no way he could do this...SO PROUD OF YOU ALEX!!

So all in all things have been looking up this past week. I am very pleased with his attitude and his progress and thank God for our awesome therapist..... WE COULDN'T DO THIS WITHOUT YOU AND YOUR AMAZING PATIENCE with Alex! LOVE YA'LL BUNCHES!! We have been very busy with school, therapy and just life in general so I apologize for the long spurts in between my blogs. We have Prom on March 25th, Hawaii (our trip from Dreams Come True) on March 27th and he will turn 18 while we are in Hawaii on March 30th! BIG MONTH FOR US!!

THANK YOU GOD FOR GIVING ME THE STRENGTH TO PUSH THROUGH THE DARK DAYS....THANK YOU FOR OUR SECOND CHANCE! WE WILL DO GREAT THINGS WITH YOU...THROUGH YOU AND FOR YOU! AMEN!